The repetitive months of quarantine have been exhausting in every single way. One of the sources of light in this unfamiliar tunnel of social isolation has been my new bicycle, on which I have already completed over 1200km in the three odd months of owning it. Philadelphia has relatively flat elevation, good bike lane coverage, and many beautiful trails making it a great city for cycling. There are also good resources on cycling in Philadelphia that may be useful to both the beginner and professional cyclist:

These are some of my favorite spots for cycling in and around Philadelphia. All the places on the below list are easily accessible via dedicated bike lanes from University City and have no entry fees whatsoever. 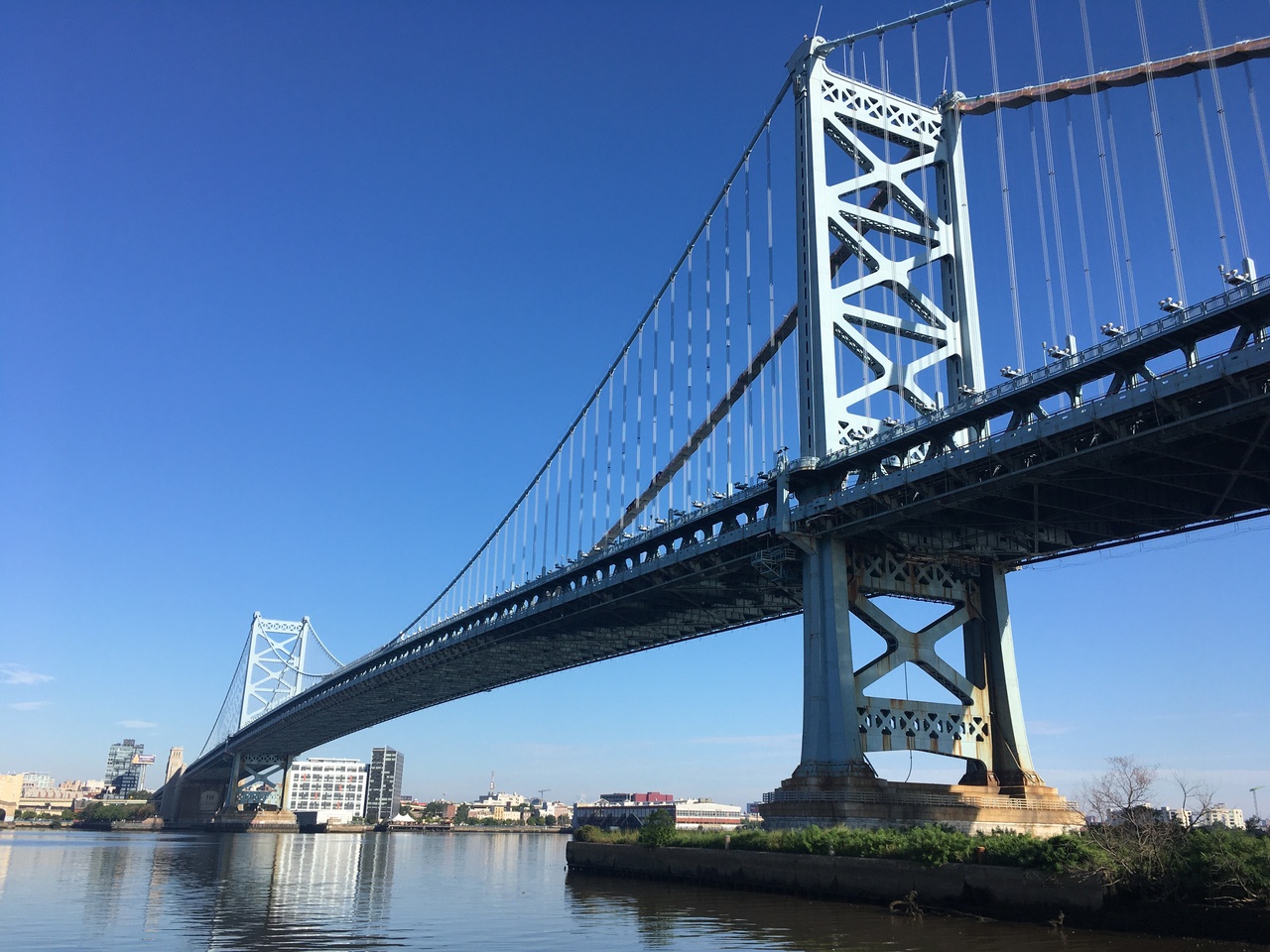 Making another appearance on my blog, the Ben Franklin Bridge

A Philadelphia landmark, the Ben Franklin bridge links the city to Camden, New Jersey. The bridge is flanked by a shared walkway/bike path on both sides, though only the right walkway is presently open. Getting to the highest point of the middle of the bridge can be a drag (and nearly impossible to do when riding a fixed-gear cycle), but it’s certainly worth it for the sea breeze and views of the Delaware river adorned by Philadelphia’s skyline in the background. One can also hear and feel the periodic vibrations of the NJ Transit train right below the walkway. 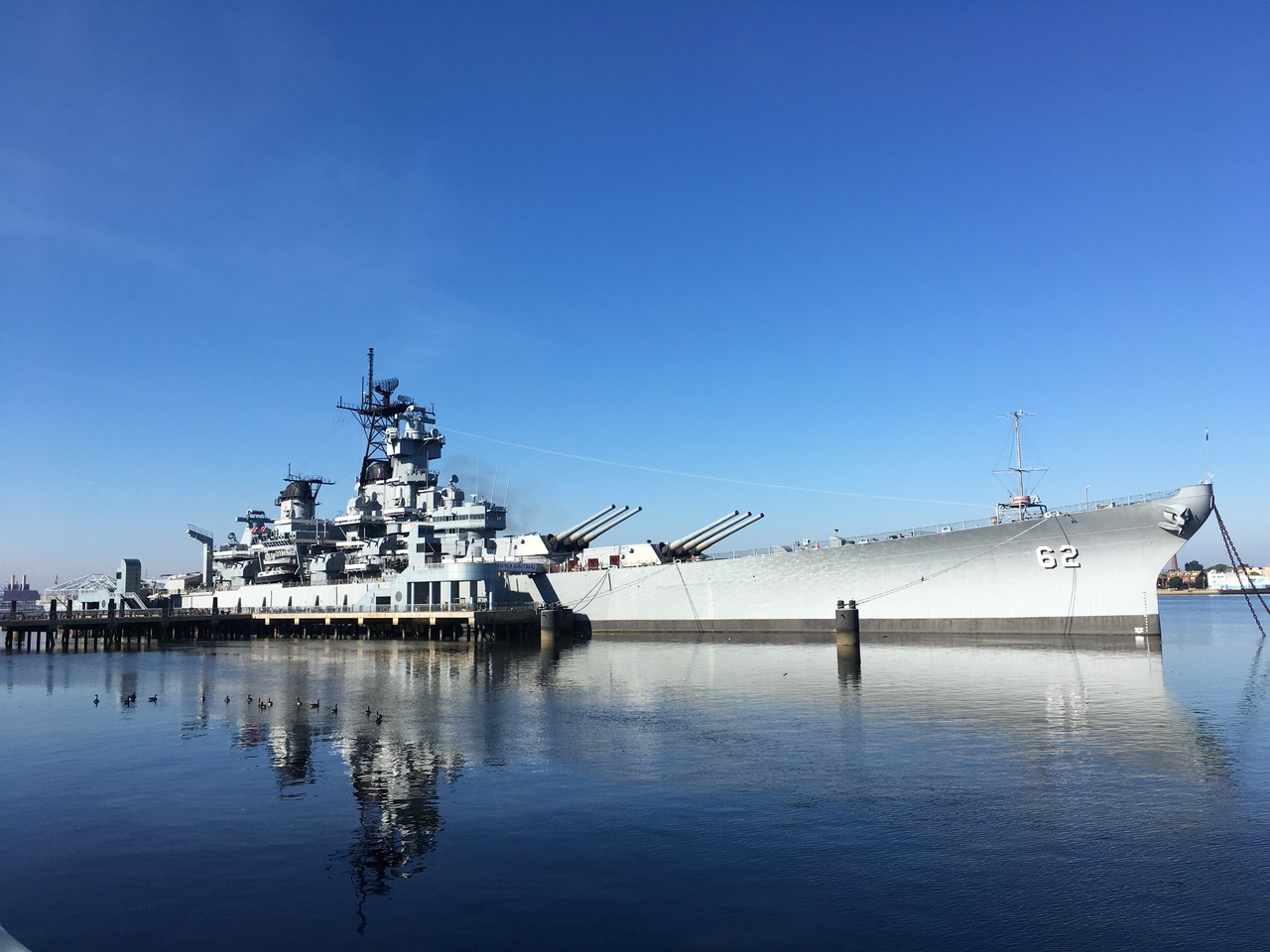 The Camden Waterfront and the Rutgers Law School are the main attractions on the other side of the bridge. I also stumbled across a floating battleship museum moored on my first trip to the Waterfront.

I personally find Race Street the safest way to go to the Ben Franklin Bridge when starting from the Art Museum. The transition in scenery and smells from the Ben Franklin Parkway to Chinatown is very enjoyable. The Spruce Street corridor makes it easy to go return to University City and it has bollards lining the bike path for additional safety. 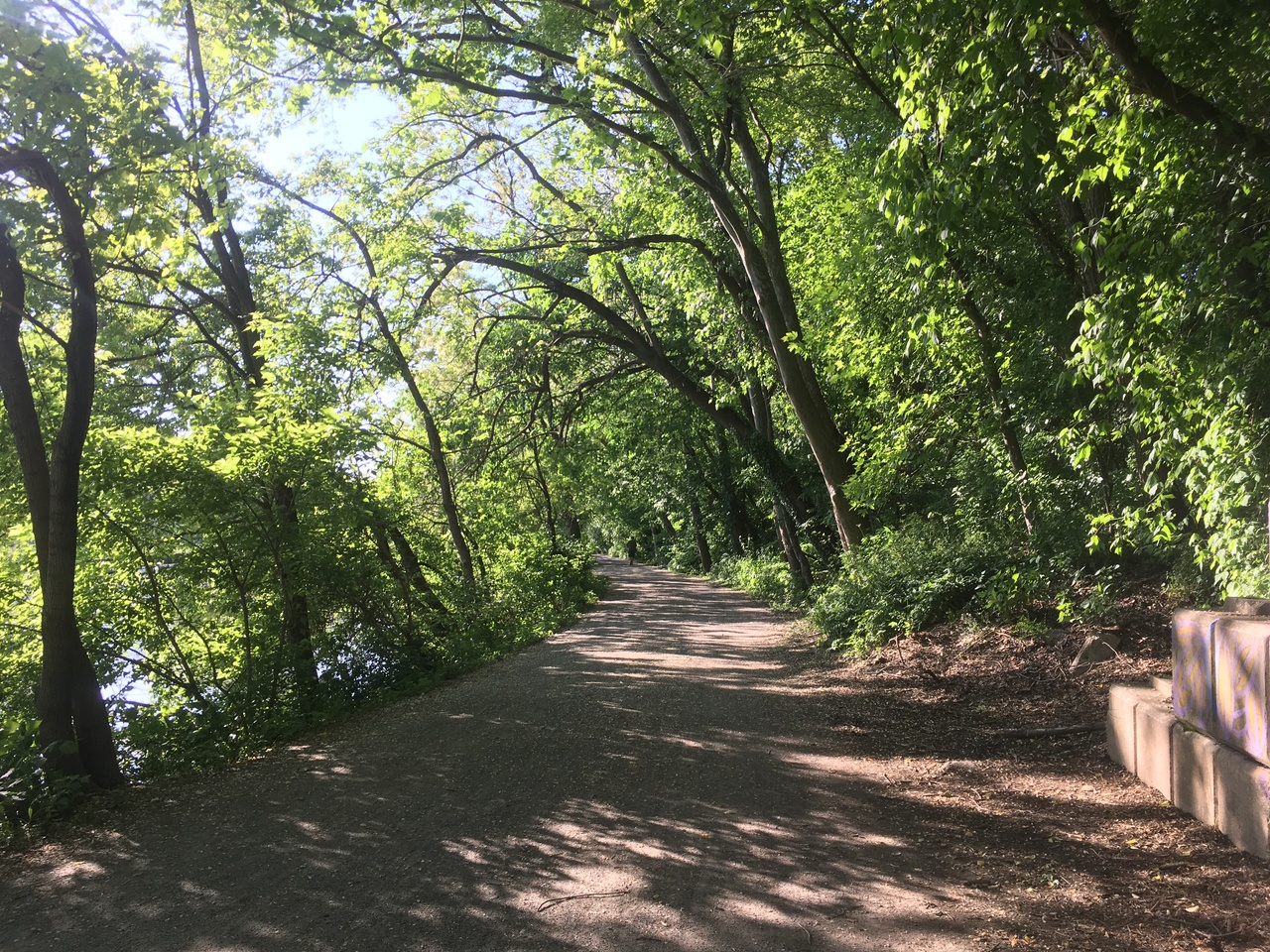 Dirt section on the Manayunk Trail

The beginning of this trail is a stone’s throw away from the Trek Manayunk showroom, which itself is a short ride from the East Falls bridge. The initial section of the trail consists of wooden boardwalks and some light gravel, followed by miles upon miles of paved, treelined roads running parallel to the Manayunk canal. The number of walking/running pedestrians thins as one goes further down the trail. The flat surface makes it easy to cover long stretches of the trail in quick time. There are only a few greater pleasures than being able to squeeze out a consistent 30+km/hr in top gear. Though I’ve only made it as far as Bridgeport, the trail goes on till the Valley Forge National Park. A 100km and then a 100 nautical mile round-trip on the Manayunk Trail is currently at the top of my Philadelphia bucket list.

The Wissahickon Valley Park is a short ride away from the East Falls bridge. The park is huge and abundantly green. The first few miles of the trail are on paved roads with small hills. The remainder of the trail is covered with gravel to keep things interesting. I’ve always liked the feeling of riding on gravel since the lack of purchase on the surface forces a more attentive and focussed riding style. Wissahickon also is home to several mountain biking trails of varying levels of difficulty. I tried some of the mountain biking trails on my hybrid bike, but it soon became apparent that the lack of suspension and the (in mountain bike terms) narrow 35mm tyres made the bike ill-equipped to deal with the off-road features that a proper mountain bike would have taken in stride. 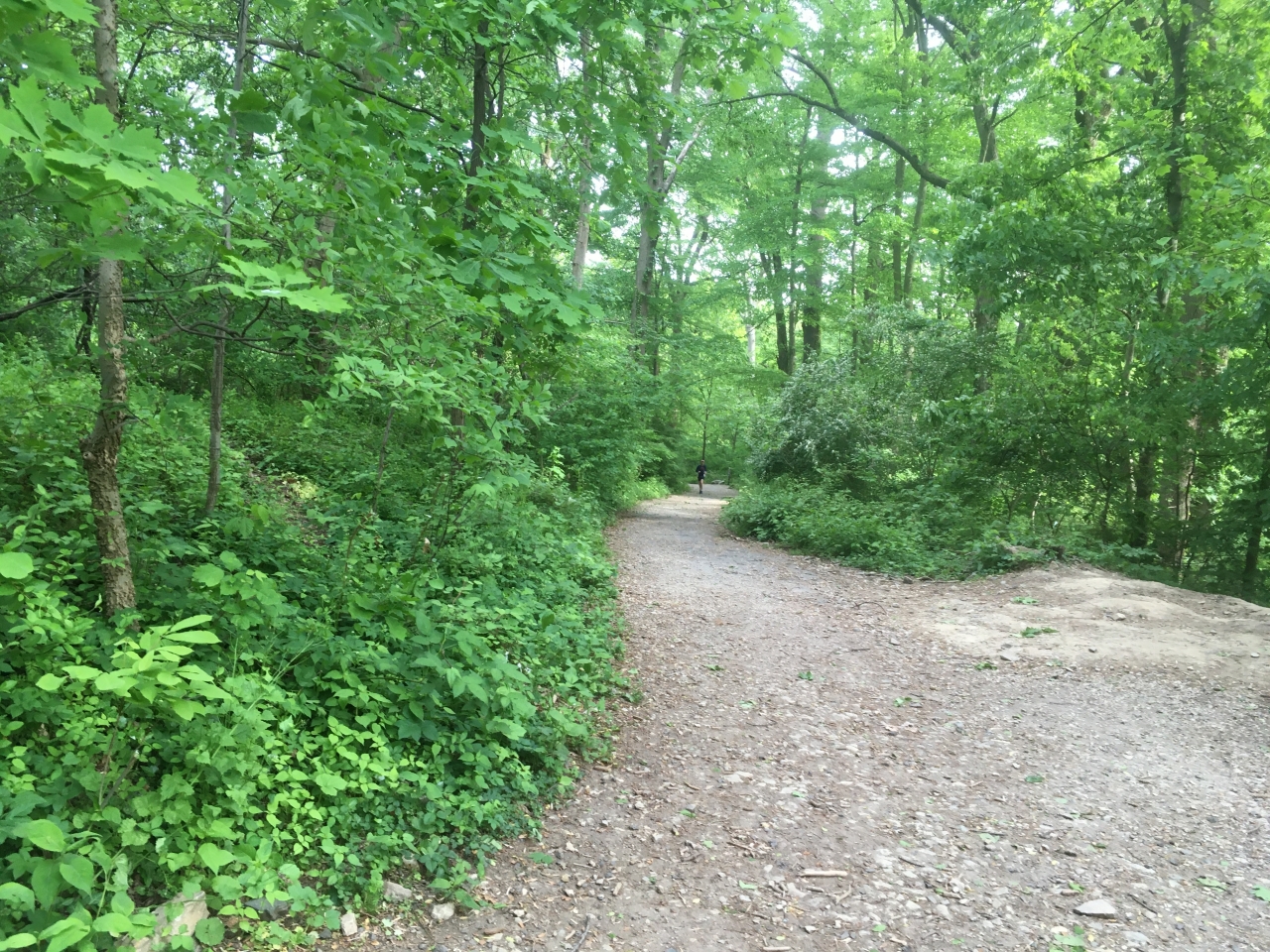 Gravel section of the Wissahickon Trail. A mountain bike would be a lot of fun!

UPenn’s Morris Arboretum is only a short ride away from the end of the Wissahickon Park. Entry is free for PennCard holders and the garden has some beautiful sights when the flowers are in season. The entire length of the round-trip when starting from Penn’s campus is about 45km to the Arboretum and back. 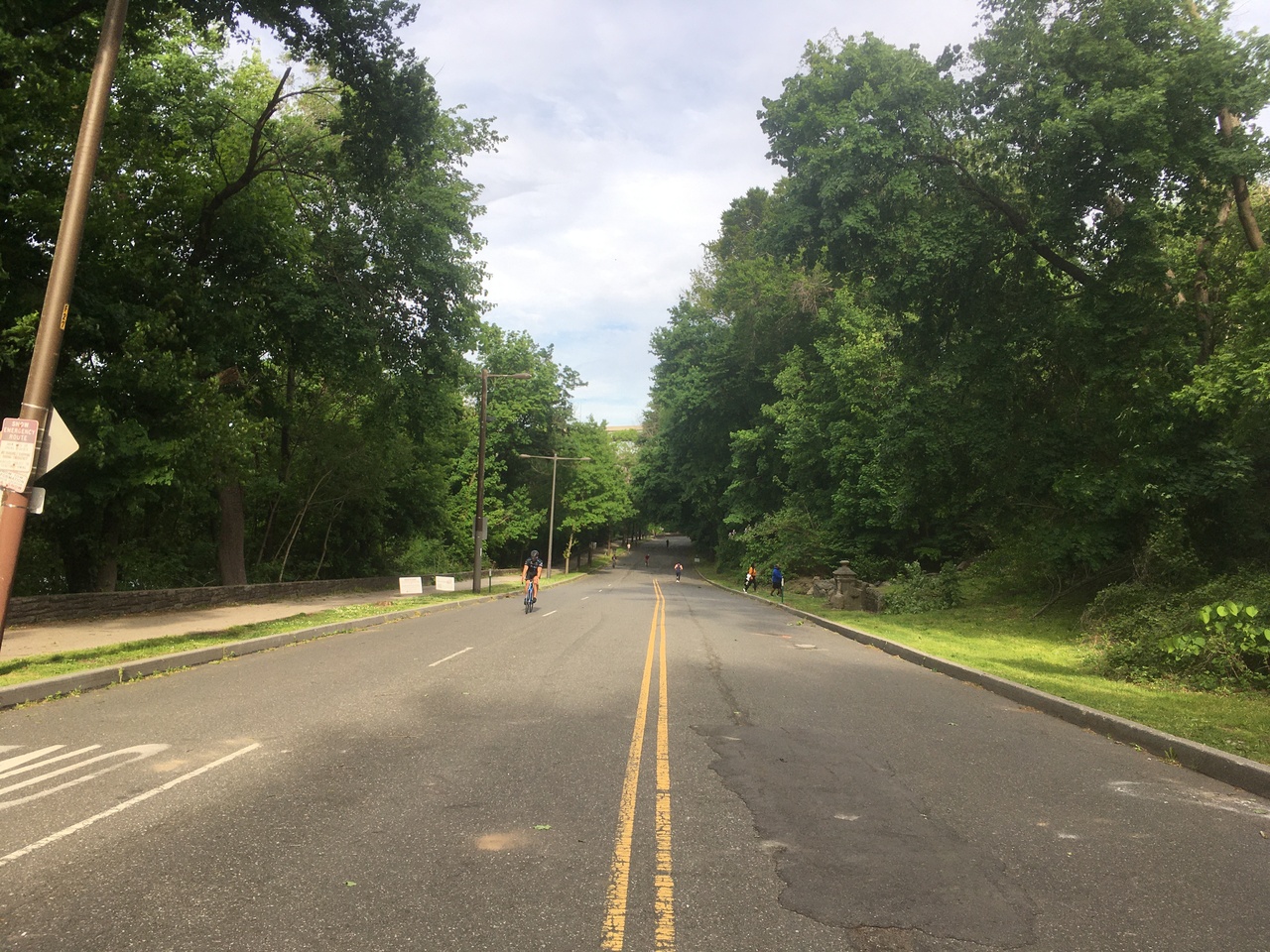 The MLK drive runs along the Schyukill river and it starts near the Philadelphia Art Museum. Normally opened to regular traffic, MLK drive has been closed to motorized vehicles since the start of the pandemic. While the MLK drive can feel crowded with the sheer number of cyclists and runners in the evening, there’s plenty of room to ride as fast or slow as you want to. The tall slope near the end of the drive leads to the Strawberry Mansion bridge, which connects to the East side of Fairmount Park. 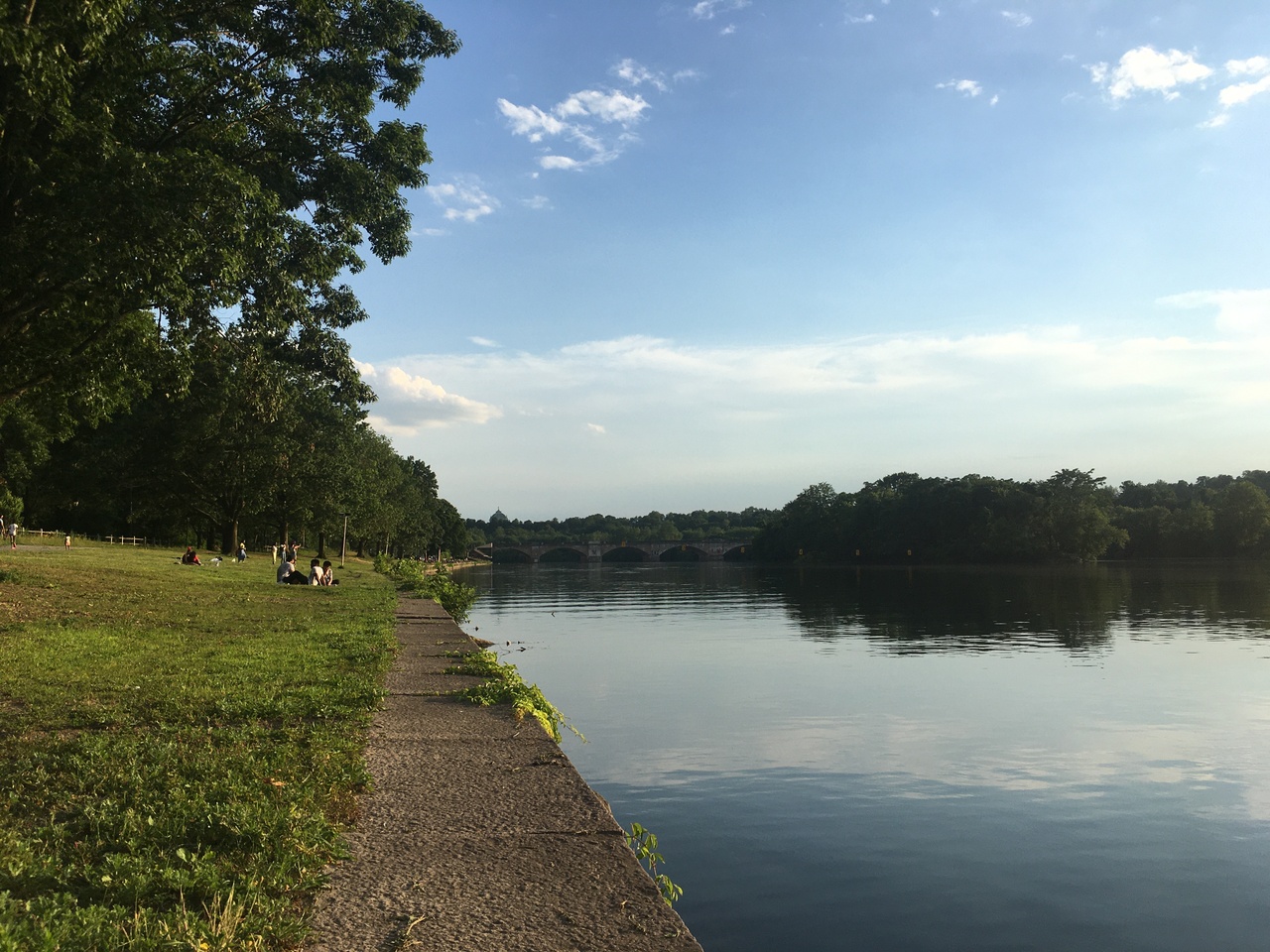 Kelly Drive lies on the other side of the Schyukill. The views are more scenic, but the path is also much narrower. Kelly Drive sees a lot more pedestrians, so it isn’t nearly as smooth as riding on the MLK drive.

Despite the MLK and Kelly Drive often being my first recommendation for new cyclists, I have become disenchanted with going up and down these trails after making several dozen trips to get to Wissahickon and Manayunk.

I have been to Cobbs Creek only once but it’s interesting enough to merit a position on this list. The Creek is located in the West part of Philadelphia and extends near the south-west corner of the city. The trail goes in a loop and I liked the gentle slopes which make fast cycling a breeze. However, as the Creek is in a gritty neighborhood, I would suggest making a trip before it gets dark.