On the eve of the day I start my masters degree in Robotics, I am definitely in a better state of mind than I was when I started undergrad.

I have to start by saying that the last year was blissful. My last semester on campus had very little in the way of any academic pressure and my thesis in Singapore at the ARL was everything I wanted it to be and much, much more. It has given me cold feet about whether the sharp dip in academic workload from my third to fourth year will become a detriment to how I will be able to handle the high workload of a master's degree. On the other hand, the break from frantically jumping from project to another has given me ample time to relax and evaluate what I want from this degree. Despite speaking with many people who are treading the same path, my goal of what a career in robotics will look like isn't entirely clear to me. Yet, I have high hopes that this industry will be entering a golden era not long after I graduate.

I expect a lot of changes in doing a program which demands exacting knowledge of three major fields of engineering, but there is plenty in the comfort zone of computer science that I can sink my teeth into. Despite all the concerns I've had about the graduate student life in the past, I am excited to see what the University of Pennsylvania and its Robotics program has to offer. 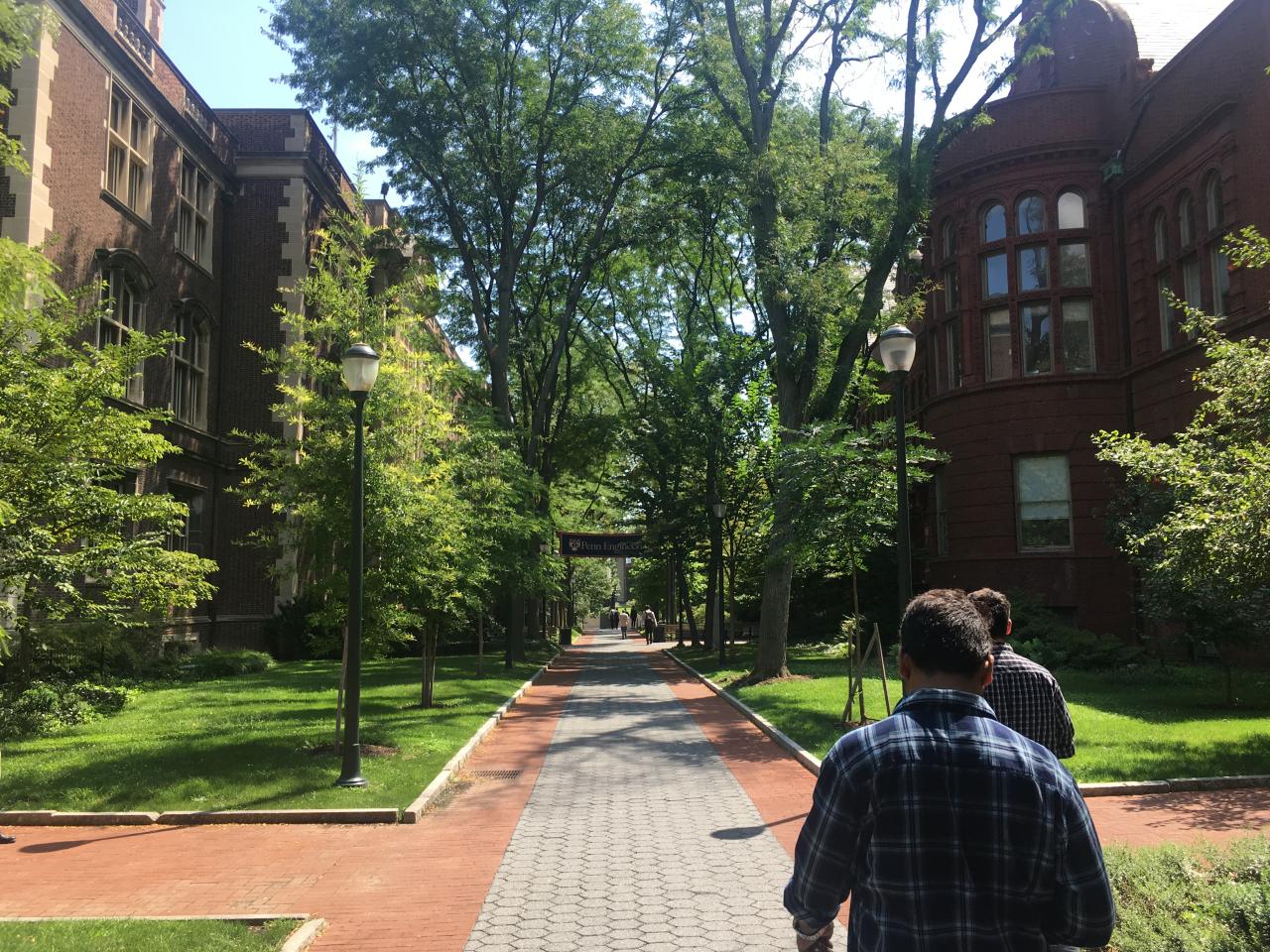 One of the few pictures I have of Penn's lovely campus

It's quite different from how I felt when starting undergrad in 2015, when there was some negativity in the air, a sentiment which was often shared with several batchmates who felt they could've gone to other colleges or taken other branches had things gone their way. That said, BITS Pilani's vision and policies awed many an impressionable fresher, me being one of them. Unfortunately, it can't be said that anyone graduating now would look back as fondly on their alma mater now as they did back then. It's clear that the academic utopia presented to us during the orientation was indeed too good to be true. It's not for lack of trying on the part of faculty or administration however, but instead of a combination of pedagogy not being able to keep up with the times and the difficulty in filling academic positions with highly qualified professors in India. For whatever reason, the students and the faculty were always at odds with one another and that has been detrimental in developing a healthy campus culture. Giving credit where it's due, college gave me the freedom to try out, succeed and fail at a number of pursuits with very little impact to future prospects. This is not a luxury I can take for granted anymore, for now the costs are far greater.

My priorities changed the most in my first year of college and I'm glad that I didn't fixate on any goal till I had a visceral feeling that a good idea (read GSoC) could work out. I had initially fancied myself graduating with a 9+ CGPA at the end of college, but my first semester's result made that vision a little too ambitious. Winning (yes, winning) the ACM-ICPC was another fascination I had during my first semester, but after a few months of grinding through various online archives, I realised that the pressure of competitive coding wasn't for me. There was still magic in programming for me and I had an idea during the previous summer vacation that I felt could realistically turn into a GSoC project. But that kernel of an idea only flourished when I pulled an all nighter coding a prototype of my idea during my first Diwali vacation on campus. From there on, I wasn't chasing an abstract idea, I was doing something far more tangible and that gave me the thrust I needed to get in touch with numerous KDE developers to put in a solid proposal and formally become a GSoC student that very year.

However, that led to hubris in my second year where I felt that any project could be conquered. I then later learning the hard way that perhaps I need to be a bit more discerning about my own capabilities after having wasted a lot of time working on projects that had little to show in the end. I think that in the most general sense, college is a good time to figure out your personality traits and to see what works and what doesn't. Time is usually abundant and the repercussions of bad decisions are temporary. It's hard to imagine any other time one would get a chance to explore like this. Looking back, there is plenty I will cringe about the 2016 version, or heck, even the 2018 version of me. But isn't that what personality development is all about? I would say that cringing on a past version of yourself (while uncomfortable), is a good thing because it shows that you are able to identify undesirable traits about yourself that you couldn't previously.

I would be remiss not to mention all the awesome people I've met along the way. Much of what I've been able to achieve in college and what has been crucial in bringing me to UPenn is because of these experiences of building strong connections with people who have gone out of their way to help me. I'm also eternally grateful to those people who told me when I was out of line or when I wasn't thinking rationally. It's also been great to have the privilege to travel the world during undergrad thanks to a couple of KDE conferences. My time with the ARL in Singapore was a distillation of everything I could have wanted from an internship and I feel much more prepared for master's after my time there.

In conclusion, I am quite looking forward to my time as a master's student and getting back on the treadmill of academic productivity. Graduate school will be another major reset of sorts, of the same kind as which happened when switching from school to undergrad. I hope that it won't be long before I develop some perspective on what life as a graduate student is like so that I can share it here. I also look forward to getting reacquainted to life in the US and seeing all that this country has to offer. Above all, I'm looking forward to seeing what education is like when done at its highest level.