I have officially started my GSoC project under the mentorship of Boudhayan Gupta and Pinak Ahuja.

The project idea's implementation has undergone some changes from what I proposed. While the essence of the project is the same, it will now no longer be dependent on Baloo and xattr. Instead, it will use a QList to hold a list of staged files with a plugin to kiod. My next milestone before the mid-term evaluation is to implement this in a KIO slave which will be compatible with the whole suite of KDE applications.

For the last two weeks, I've been busy with going through hundreds of lines of source code to understand the concept of a KIO slave. The KIO API is a very neat feature of KDE - it provides a single, consistent way to access remote and local filesystems. This is further expanded to KIO slaves which are programs based on the KIO API which allow for a filesystem to be expressed in a particular way. For instance, there is a KIO slave for displaying xattr file tags as a directory under which each file marked to a tag would be displayed. KIO slaves even expand to network protocols allowing for remote access using slaves such as http:/, ftp:/, smb:/ (for Windows samba shares), fish:/, sftp:/, nfs:/, and webdav:/. My project requires virtual folder constructed of URLs stored in a QList - an ideal fit for KIO slaves.

However, hacking on KIO slaves was not exactly straightforward. Prior to my GSoC selection, I had no idea on how to edit CMakeLists.txt files and it was a task to learn to make one by hand. Initially, it felt like installing the dependencies for building KIO slaves would almost certainly lead to me destroying my KDE installation, and sure enough, I did manage to ruin my installation. Most annoying. Fortunately, I managed to recover my data and with a fresh install of Kubuntu 16.04 with all the required KDE packages, I got back to working on getting the technical equivalent of a Hello World to work with a KIO slave.

This too, was more than a matter of just copying and pasting lines of code from the [KDE tutorial](https://techbase.kde.org/Development/Tutorials/KIO_Sla ves/Hello_World). KIO slaves had dropped the use of .protocol files in the KF5 transition, instead opting for JSON files to store the properties of the KIO slave. Thankfully, I had the assistance of the legendary David Faure. Under his guidance, I managed to port the KIO slave in the tutorial to a KF5 compatible KIO slave and after a full week of frustration of dealing with dependency hell, I saw the best Hello World I could ever hope for:

Baby steps. The next step was to make the KIO slave capable of displaying the contents of a specified QUrl in a file manager. The documentation for KProtocolManager made it seem like a pretty straightforward task - apparently that all I needed to do was to add a "listing" entry in my JSON protocol file and I would have to re-implement the listDir method inherited from SlaveBase using a call to SlaveBase::listDir(&QUrl). Unbeknownst to me, the SlaveBase class actually didn't have any code for displaying a directory! The SlaveBase class was only for reimplementing its member functions in a derived class as I found out by going through the source code of the core of kio/core. Learning from my mistake here I switched to using a ForwardingSlaveBase class for my KIO slave which instantly solved my problems of displaying a directory. 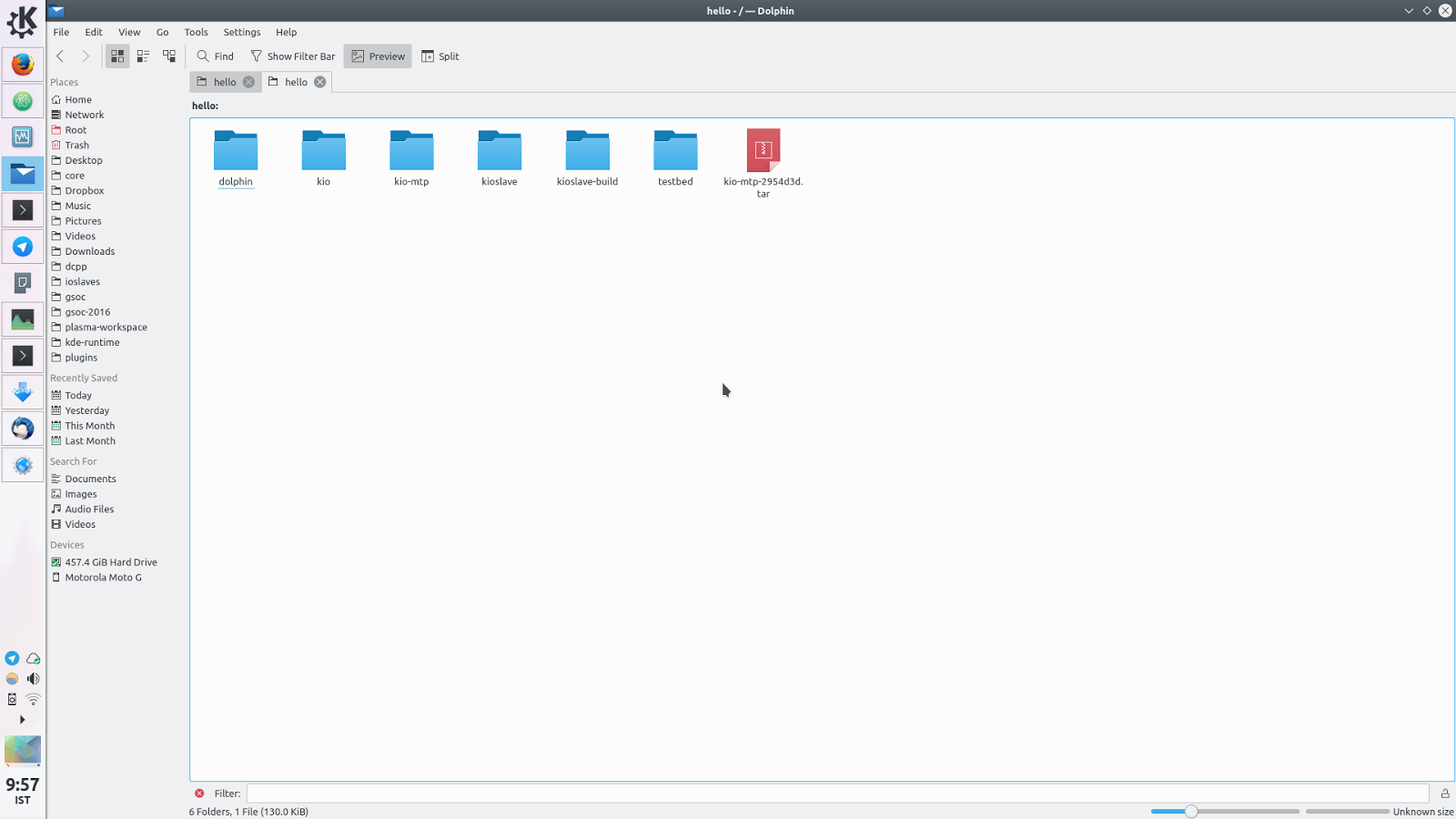 According to my timeline, the next steps in the project are

So far, it's been a great experience to get so much support from the KDE community. Here's to another two and a half months of KDE development!